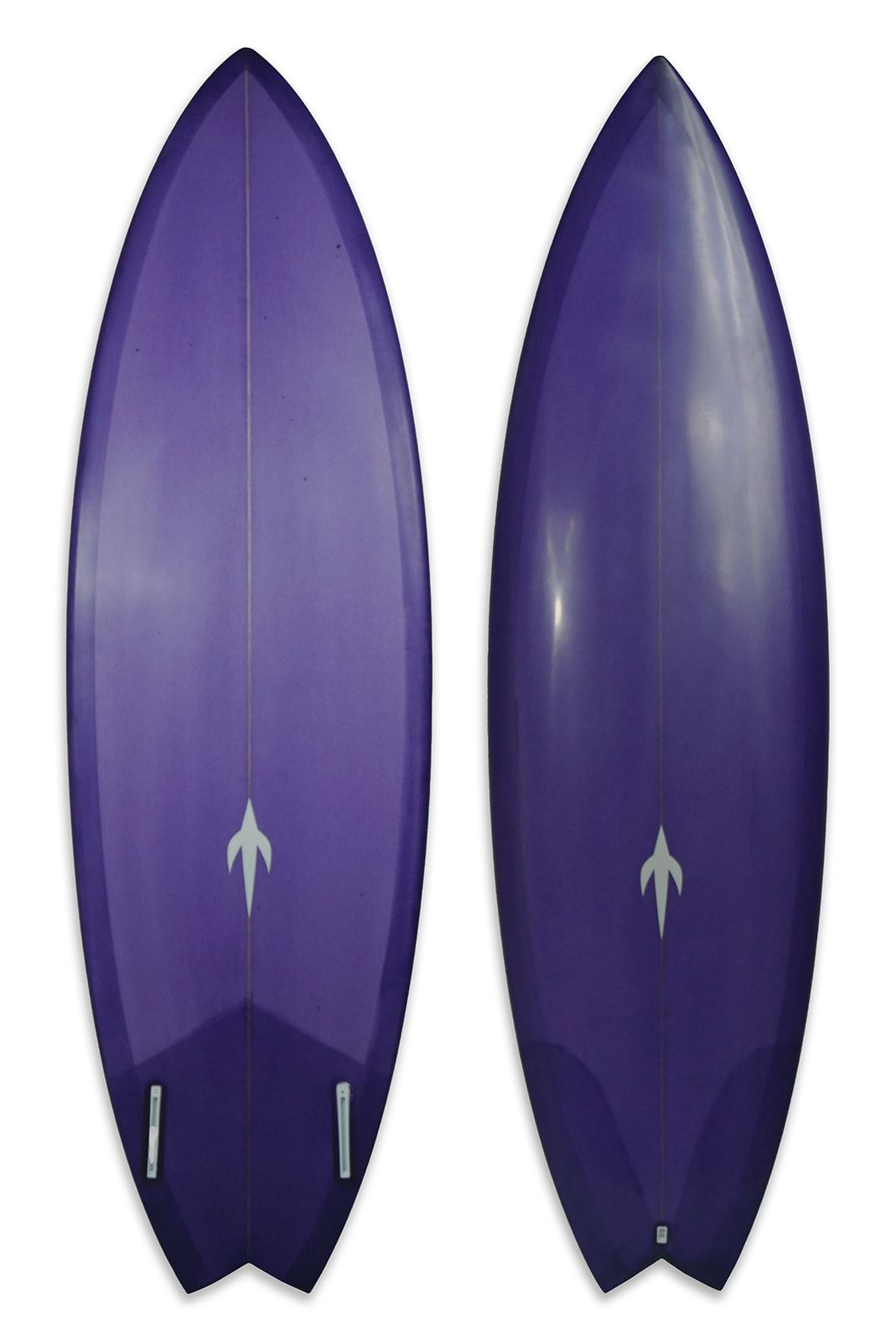 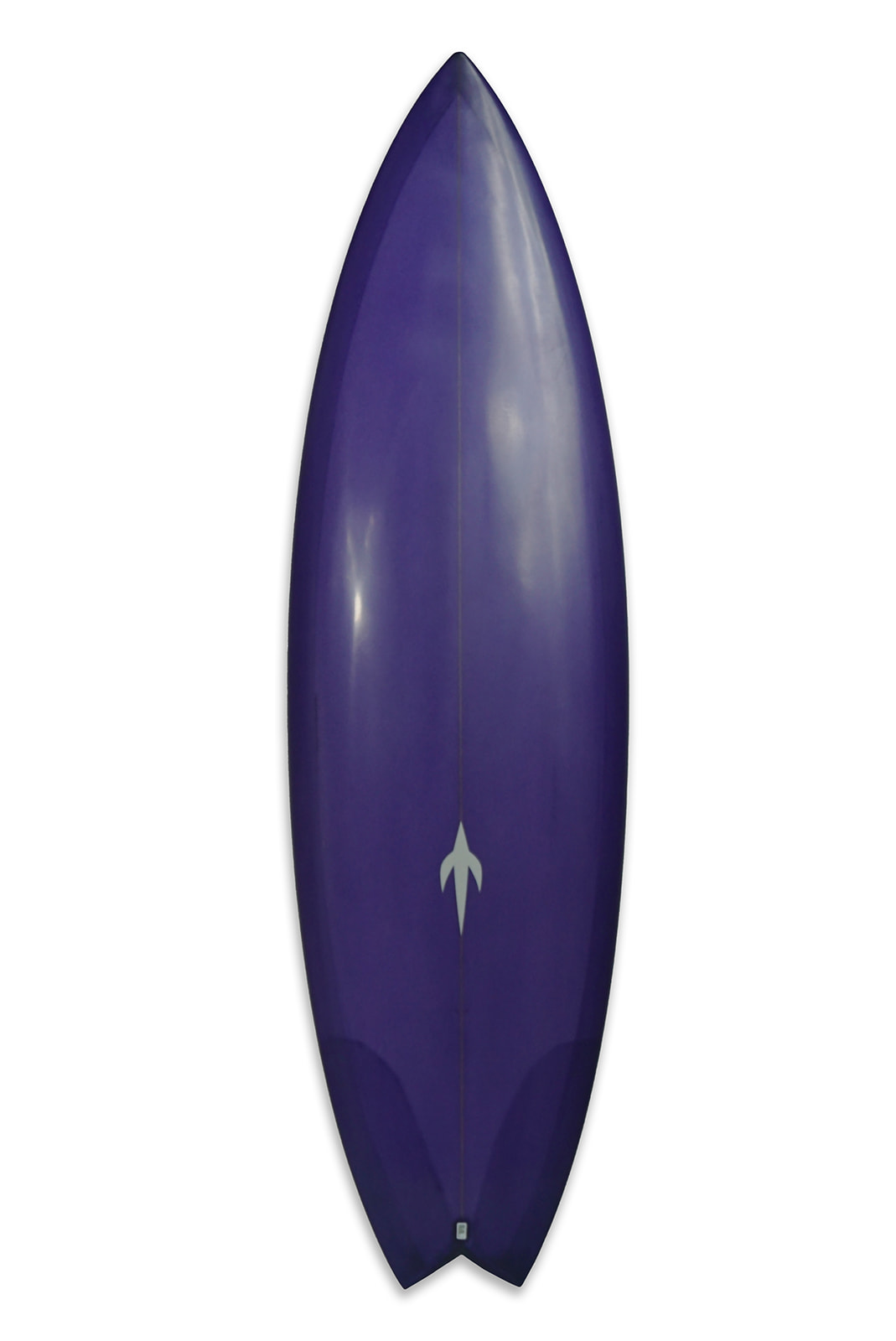 Rick Cane Pro model. This is the board Noa Deane rode in Stab's Electric Acid Surfboard Test. He didn't give it a horrible review, which was a huge relief! One year later Aritz Aranburu rode his RCP in the Pantin Classic in Spain and placed 2nd.

I started riding this model in the spring of 2019, and was instantly hooked on it's speed and looseness. It’s nice to stand up and not have to work for speed, and instead be able to just focus on controlling it and going where you want to go. This saves energy and helps to smooth out your surfing. The board starts to work when it's waist high, and gets better as it gets bigger, up to around 5ft Hawaiian. Somehow this twin fin works just as well backside as it does frontside. It's ability to lay down a frontside carve as consistently and as good as my normal shortboard also really surprised me. It took a little time to figure out the release, but as it turns out, all you need to do is just hit the wall a little higher to accommodate that extra fin height. And on the open face, just continue your arch all the way around and give it a little push to release the tail. It's pretty much the same as a thruster, just wait one sec longer.

This twin fin is great supplement to shortboarding. Some people actually think they surf better on it than their thruster. It's very user-friendly, and anyone who can ride a shortboard can ride it. If you're a decent surfer, your going to be going faster than normal. And if you only know how to go straight, then your going to be going a lot faster! Plus, it's loose, so it's easy to turn.

The swallow tail is my go-to with this fin setup, but I also have a 5'8" squash diamond tail version of this board that feels even more loose and lively. That might not be the best thing if it's your first twin fin, but who knows, maybe you'll love it! The board surfs really tight backside, and has a little extra looseness frontside in the lip and on the open face. Round tail, round pin and squash tail are all also options.

I’ve been asked if the board slides out, and that can definitely happen if you rush the bottom turn before setting your rail or try to do a mid-face bottom turn. This often results in a weird board slide thing that you usually recover from. But dropping into a barrel is fine, somehow. I've never had one slide out in that situation. ‍

The first RCP I made was in 2014, when Tanner Gudauskas asked me to make him a twin fin. I went down to my shaping room and sat there for a few hours trying to figure out how to make a twin fin to accommodate a heavy-footed, world-class goofy footer. I’d imagine he just wanted to experience a twin fin or have something fun to ride, but at the same time I thought it’d be great if he could perform at a high level for training purposes, especially on those small days. My aim was to tighten everything up while keeping the flow and skatey-ness intact in hopes of blending fun and performance evenly.

I made a few more in 2016 for my friends Cole, Flick, and Dave, who are all 180 lbs+ sized friends. Finally, in 2019, my Balinese friend Koming, who's more my size (about 140lbs), ordered one. I took the chance to test ride it before sending it back to Bali for him with my brother. I felt like I was barely keeping up with the board, every little turn felt a little more exciting and a little faster. Going through the flats was way easier. Once that board left for Bali, I knew I needed one of my own.

Under the Covers with Daniel Jones

The Agave Surfboard: From Planet to Wave

In the Shaping Bay with Daniel and Mikala Jones

Thank you! Your submission has been received!
Oops! Something went wrong while submitting the form.

Takes about 2-3 weeks for a basic shortboard with removable fins. Glass on fins, resin tint or custom paint could add another week or 2 on top of that. Carbon Fiber with Epoxy resin please add 2 more weeks. Thank you for your patience.
‍
If you need it sooner there is a 150 USD rush fee available.

Shipping via Air Cargo. meaning I drop off at HNL and you pick up at an airport near you. Or FedEx door to door, costs significantly more and has a lower length restriction.

There is a 60 USD packing fee and it covers up to 4 boards.

Adding additional boards to a shipment adds about 10 - 25 USD more per board. We can get up to 4 shortboards in a box.

Custom boards are made-to-order based upon your desired specifications. Daniel will consult with you directly to understand your surfing journey, profile, target conditions, level of experience, and surfing goals in order to determine which board and dimensions will work for you.

All Surfboards are made-to-order based upon your desired specifications. Daniel will consult with you directly to understand your surfing journey, profile, target conditions, level of experience, and surfing goals in order to determine which board and dimensions will work for you.

Jones Surfboards offers options to further individualize your board. Hand -painted artwork, color design, fins by Daniel Jones can be added for optimized individual board.

Thank you! Your submission has been received!
Oops! Something went wrong while submitting the form.